January 05, 2012
In a previous post I discussed one method I use to improve my testing skills, spending spare minutes testing a machine or website that is readily at hand. The example I used was Google's search, in particular its currency conversion feature. This is useful for getting practice, and trying to speed up my testing, that is - finding information more quickly.

Another activity I perform is watching someone else test something. As testers, we are often asked to be a second pair of eyes, as its assumed that a programmer might not notice some issues in their own code. The idea being that you will not be blinded by the same assumptions, and will hopefully find new issues with the software. Using the same logic, by watching someone else test, I can examine their successes and failures more easily.

I've asked many people to test a variety of objects, usually things to hand, like a wristwatch or something I've recently bought. One recurring pattern I have noticed is how programmers and testers approach the problems. That is, they tend to use different techniques and I think this is because testers have a slightly different underlying approach.

For example I once gave a toy to a colleague to 'test'. The description I gave was limited: A small plastic/rubber toy, aimed at toddlers and above. Bought for a few pounds. You can see what it looks like here: 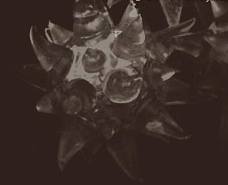 The tests suggested were good, a range of things that I would hope any toy my son had would of been subjected to. For example toxicity, tearing etc. They also examined the toy and noticed a spike had been torn - after which I explained the toy had previously had a brightly coloured chord loop or lanyard that had been torn off. This also produced a few more relevant tests, all good.

After a while, the suggested tests had been exhausted, as well as the associated questions, such as "Did it come with a manual?" (The answer was no - except for a piece of paper with words to the effect of "Made in China, do not burn."). These were all good tests and questions. But I've noticed that testers would ask many of the same questions and suggest similar tests, but also suggest another group of tests.

Programmers are builders, they focus on what they are constructing. Their experience tends to cause them to follow very much what they are presented with. The plan, the specification, the system they are upgrading. As such, when presented with a testing problem, their tests focus on the same aspects, quite rightly. If they were building the system themselves, their tests and questions would all be what I'd expect them to do. Experienced and skilled programmers bring a wealth of background knowledge that can make their work very thorough, and of high quality.

As such, good programmers can often do a reasonable job of software testing. There is one area of testing that I have noticed that programmers tend to miss. Good testers will often try to find areas they don't know about (Rather than examining those that they do know in greater and greater detail). They have techniques for breaking out of their own view of the problem. While a programmer will often only perform a test if they can frame it back to a 'requirement' testers often perform a test - because they can.

The sorts of things testers suggest is pretty interesting, and varied, but they tend to be destructive. I've asked testers, after they have suggested an "off the wall" test that surprised me, "Why would you do that?". The responses vary, and I suspect that the justification is often being generated when I ask. Thats not a problem, much of what we do in testing is not "named". They are techniques people have learned by doing, and maybe never had reason to analyse and put a name to. What I think the testers are doing is performing "something" that will expose new behaviour.

They have learned that by doing predictable things, you will tend to get predictable answers. If you work with the same assumptions and behaviours that the rest of your team do, then you are unlikely to see new and interesting behaviour. By, for example, when asked to test a wristwatch - they suggest removing the battery or throwing the watch in the sea, that may seem a little strange. They certainly don't seem to match with the Conditions of Satisfaction. But they might actually help identify important features of the wristwatch, that otherwise might not of been discovered. For example the watch was made of Titanium, which does not rust in salt-water. Or that the wristwatch was powered by the motion of the user, as well as by a 'backup' battery.

The testers have learned that getting another viewpoint, can discover new information. And as information gatherers, thats a pretty important achievement. They are climbing a tree, not to see if the tree is climbable but rather to find out whats there? As such they suddenly see the size of the forest, the life supported in and around the tree or that they have a pine-wood allergy. In the toy example above, if the tester had picked up the toy and crushed it, they would have noticed it start to flash bright colours.