Wrong in front of you.

October 27, 2011
In 2008 I attended GTAC in Seattle, a conference devoted to the use of automation in software testing. Since their first in London in 2006, Google have been running about one a year, in various locations around the world. This post isn't really about the conference, its about a realisation that I had the day after the conference.

After the conference I went sight-seeing in Seattle. I rode the short Simpsons-like Monorail and took a lift up the Jetsons-like space needle. I enjoyed my time there, and found the people very friendly. The conference had been very technology focused, many (but granted, not all) speakers focused on tools and how to use tools. While useful, the tools are only part of testing - and even then they typically just support testing rather than "do" testing.

While I was at the top of the Space needle, I took out my phone and like a good tourist started taking pictures. I'd typically take a couple of pictures then look at them on the screen. While on the outer viewing area, I noticed a port with a few container ships approaching and departing the docks. I took a quick snap of the port area, hoping that the detail of picture would be visible. I checked the phone's screen, and was struck by something. Here is the picture: 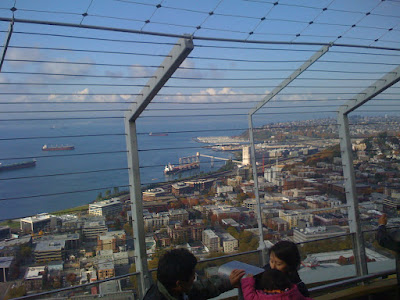 What surprised me, were the wire barriers. I had not even noticed them before. They quite effectively ruin the shot. In my minds eye the scene I had been looking at resembled this: 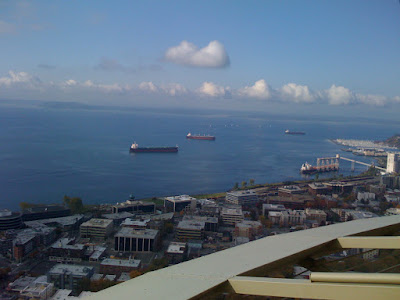 This second picture, taken minutes later, after I had realised my mistake, was much closer to my uncritical impression of the view from the Space Needle. Our minds are very effective at filtering out unwanted or un-needed information. This is great and allows us to get on with many tasks that need our full attention. But this attention, can also show itself as mis-direction, we fail to see the [sometimes literal] barriers right in front of us. I believed I had an uninterrupted view of the docks below me, but I didn't.

This is where being critical of what is the apparently obvious, right in front of us, can help. Of course by critical I mean in the sense of critical thinking. By consciously stepping back, re-examining the evidence and asking questions that may seem silly to some, we can often highlight problems that were previously almost invisible. This is an area where tools are often very useful, by providing a quick way to capture, store and display evidence, such as pictures in our example above. But the overly-hopeful view of a world in which the machine is doing the critical thinking is still someway off, and attempts to achieve such a thing in software testing are often wasteful and become expensive to run white-elephants.